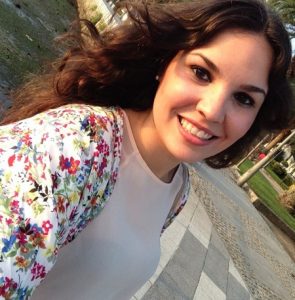 Mónica Fraile de la Paz, a student of Tourism Degree in María Zambrano – Campus of Segovia, which belongs to the University of Valladolid (UVa), is the first Young Ambassador of the World Heritage representing to Segovia.

Segovia promoted her hometown during the six months in the Hellenic city of Thessaloniki thanks to the Erasmus scholarship, where she finished her studies at the Alexander Technological Educational Institute of Thessaloniki.

The young woman has reconciled the academic training with her duties as ambassador, which she does not only in Thessaloniki, but also in other parts of the country as in Athens.

Mónica Fraile requested at the end of 2014 the Erasmus scholarship and, two years later, she knew that in her last course of study she could study thanks to the scholarship in Greece. It was months later when this project was reported, something that «could not let slip,» she said. Undoubtedly, the young woman decided to take the necessary steps to participate in the project and have more contact with her land despite being in a foreign country.

Today she says that it has been «a great pride and honor» to be an ambassador of Segovia, so she recommends it to all students, since it is an experience «that will never forget».

Mónica, like the rest of the young people who were granted participation in the project, had to be thoroughly documented about the World Heritage City that represented, in its case, Segovia. Later, he contacted the Greek authorities, his tourism offices and the university’s teaching staff and students, thanks to which he was able to make a series of presentations and activities that served to promote his city.