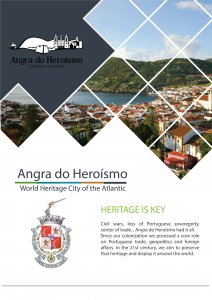 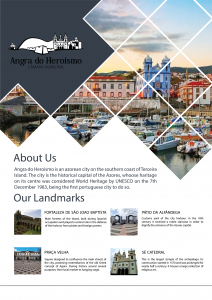 The effort to lead and create a new cultural paradigm started almost 44 years ago. This March, the youth interested in its cultural and natural heritage hopes to take the next step to promote their own city through a global platform. The creation of the Convention Concerning the Protection of the World Cultural and Natural Heritage in November of 1972 was essential to “adopt new provisions in the form of a convention establishing an effective system of collective protection of the cultural and natural heritage of outstanding universal value”.
According to the Operational Guidelines for the Implementation of the World Heritage Convention “the cultural and natural heritage are among the priceless and irreplaceable assets, not only of each nation, but of humanity as a whole. The loss, through deterioration or disappearance, of any of these most prized assets constitutes an impoverishment of the heritage of all the people of the world”.
Being born in Angra made me realize that we cannot let our cultural and natural heritage deteriorate, so that we can improve the future by learning from our past, and gave me the eagerness to pay attention to the events that surrounded me with wide array of interest and ambition to know more about them. Those ideas made me represent Angra do Heroísmo at Aranjuez and get more young people to know the heritage I had the privilege to grow up with.
Angra do Heroísmo is, from the 7th December 1983, included in the UNESCO’s World Heritage List, according to the following criteria: “Set in the mid-Atlantic, the port of Angra, obligatory port-of-call for fleets from Africa and the Indies, is the eminent example of a creation linked to the maritime world, within the framework of the great explorations.”; “like the Tower of Belem, the Convent of the Hieronymites of Lisbon and like Goa, Angra do Heroísmo is directly and tangibly associated with an event of a universal historic significance: the maritime exploration which permitted exchanges between the great civilizations of the earth” which I will try to briefly approach on the next pages.
The next three points should be the aim to prove that Angra do Heroísmo is an exponent of just that, an irreplaceable city that fulfils the Strategic Objectives of the «Five Cs»: “Credibility”, “Conservation”, “Capacity-building”, “Communication”, “Communities”.

1. Historical Aspect
“One of the most noble patterns of Portuguese glory”. Almeida Garrett, one of the finest Portuguese romantic poets, described Terceira island through these words. It was there that the village of Angra (later Angra do Heroísmo) was born in 1474 by concession to Álvaro Martins Homem. Since its foundation, Angra assumed a leading role amongst the remaining islands off the Azores. The first to be declared city, in 1534, and to be appointed by Pope Paul the Third, Episcopal Seat of the Azores. Due to these important attributes, Angra was selected as the center of trade in the Atlantic, in which, nearly every ship, had to resupply and repair through their journey.
But Angra most notable accomplishments were not only trade related. Political and military events were also a close reality, which would later give Angra “the heroism”, assigned by the same Garrett, which wrote the decree that gave the city the title of «Mui nobre, leal e sempre constant cidade de Angra do Heroísmo»(1).
And there are many reasons to justify it. This city was, between 1580 and 1582, the only place where the sovereignty of the kingdom of Portugal was recognised. During this brief moment of independency from Spain with the government of D. António, Prior of Crato it also occurred the Battle of Salga (1581) in which the crumbles of the Portuguese Army and the population of the island repeled the attack of the Spanish Empire.
Once again in 1828, Angra was at the centre of Portuguese politics and military, and was the soul of the liberal movement in Portugal. The city received the Provisional Board, on behalf of Queen Maria II of Portugal, making it two years later, the capital of the kingdom. During the period of civil war Angra was the bastion of the new regime in Portugal – the constitutional monarchy.
During the 20th and 21st centuries Angra do Heroísmo is still relevant and helps shape Portuguese Foreign Affairs, in particularly the Portuguese entrance in NATO as a founding member. My ancestors helped building a city in the middle of the Atlantic that is so culturally rich that I need to share it with the rest of the people interested in natural and cultural heritage.
All events mentioned fall into the VI inscription criteria of the UNESCO’s guideline to which Angra do Heroísmo successfully applied and was nominated world heritage.

2. Religious Aspect
A great majority of the culture produced in Angra do Heroísmo was influenced by the Catholic religion. As mentioned before, almost from its foundation, the colonization of the island went “hand in hand” with the Catholic church. Under the influence of Franciscan spiritualists, the introduction of the Holy Spirit cult in Angra do Heroísmo, had also the influence of the Order of Christ whose members established in the region, due to the donation of Afonso the Fifth.
The rapid proliferation of the cult is due to the strong popular character, with the possibility of involvement by all the elements of the community. In particular, after the beginning of the 18th century, the cult of the Holy Spirit is assumed as part of the distinguished culture of the Azores.
The centre of Angra do Heroísmo possesses a great number of churches that display the donations of the wealthiest people of the city, due to the trade that was made in the island. A perfect representation of just that is the Catedral do Santíssimo Salvador(2). Built from 1570 onwards in a Mannerist style, it is the largest temple in the archipelago and it serves until today as a storage place for many works of art of religious nature.
There are also buildings like the Solar da Madre Deus(3), a typical building of the Portuguese overseas cities of the 17th century, built in the elevated zones of the city. Constructed by the governor of Angra do Heroísmo, João de Bettencourt de Vasconcelos, it was headquarters of the War Council of the Portuguese siege to the Fortaleza de São João Baptista(4) between 1641-1642.

3. Architectonical Aspect
The Portuguese National Commission of UNESCO defines the architectonical display of Angra do Heroísmo as a “classical urbanization, stable and categorically cosmopolitan, despite of its small dimensions (…) on it are concentrated all themes and motives that converge to a city founded from scratch, with an orthogonal display of its streets and with a wise and sacralizer implementation of its big churches on extreme cardinals”.
The architectonical characteristics of Angra are considered as a feat due to the abandon of the medieval models in Europe, in favour of what the modern times brought – the Renaissance and the maritime discoveries. Francisco Maduro-Dias, a historian from Angra do Heroísmo, defines its geography trough two major points: “the terrain is a small shell valley surrounded, on the land side, by a ridge of hills arranged in amphitheatre to the east, north and west” and “to the south, on the side of the sea, forming a small peninsula, the extinct volcano of Monte Brasil(5) with its re-entrances. One, larger and wide open, to the West – Baía do Fanal(6) – and another, smaller, with deep waters and almost sheltered from all winds – Angra”.
Several architectonical wonders were developed around this deep waters bay. One of them was Pátio da Alfândega(7). Initially developed during the 16th century, it achieved the purpose of being the customs yard for ships arriving from all over the globe to trade for supplies and repairs. Later in the 18th century, it received a noble staircase to dignify the entrance to the capital of the Azores.
One of the architectonical prodigies is the Fortaleza de São João Baptista. Built from 1592 to the 1630s, during the Spanish rule of Portugal (1580-1640), its great purpose was to protect the harbour of Angra and the colonial fleets from the robberies of pirates and corsairs. One of the biggest enclosed fortresses of the planet (about four kilometres), and the biggest one built by the Kingdom of Spain outside of its main territory, it houses the oldest operational garrison in Portuguese territory and Europe’s most western military organization. During World War One it held German nationals living in Portugal
Just in the opposite side of the harbour of Angra do Heroísmo it is present another great military piece of architecture. The Forte de São Sebastião(8) was built from 1568 to 1578 due to the order of King Sebastian the First of Portugal, as the primary mean of defence of the city at the time. In 1581 it contributed to the defence of island against the Spanish invasion, helping repel the fleet of D. Pedro de Valdez. It was also a core on the siege of the Fortaleza de S. João Baptista in 1641, bombarding the Spanish garrison. During World War Two it had stationed British troops, and in 2003 the Portuguese Navy had for the last time the Portuguese flag displayed there.
One of the landmarks that provides a wonderful sightseeing is the Alto da Memória. Its an obelisk erected in tribute to passage of D. Pedro IV trough Terceira island during a civil war period (1828-1834) and the liberal cause adopted by its people. Greatly destroyed by the earthquake that struck the island in 1980, it was fully rebuilt in 1985. This belvedere, many times visited by myself, allows us to put this magnificent city and its heritage in perspective of what our ancestors felt during such troubled times.
The city central square has been of great importance since almost the beginning of the colonization process. Praça Velha(9) is the name of the square near the city senate. It was the first Portuguese square designed confluence the main streets of the city, an urban ideal related to the Renaissance, giving it a resemblance of the old Greek concept of Agora. During history, it assumed several purposes, from local market to hanging stage. From the small space in the 15th century, the actual space was rebuilt in 1930 by the of culture Francisco Maduro Dias and is, until today, the central point of the city.

Being part of such a big project conducted by the Organization of World Heritage Cities is an enriching experience to help me develop a personal experience regarding my fields of studies, in specific the Public Policies specialization. Once I discovered the event I felt a drive to prosecute this goal and focus on the possibility of representing my community on a large scale. It would be an honour to give back the city that thought me a lot, not only of history but also of people.
André Mendes,
Comissioning Editor at E-IR, Master’s Degree Student in Strategic Studies at ISCSP-UL and Political Science Bachelor from ISCTE-IUL.
https://pt.linkedin.com/in/andr%C3%A9-mendes-341460b0