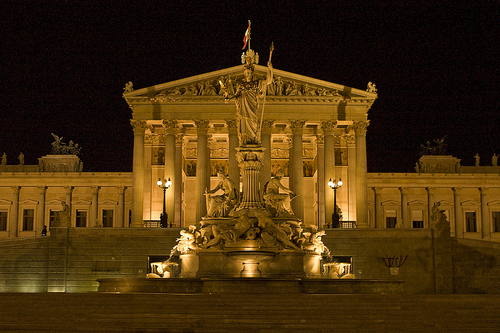 Impressions of the World Heritage in Vienna.

How young people perceive the World Heritage in Vienna, and actively shape the city´s image in a sustainable socio-cultural fashion.

The first things that will probably come to many people’s minds when hearing the name Vienna will most likely be classical music; an image of the city’s various royal palaces and monuments; or its vibrant coffee-house culture. Historic constructions such as St. Stephan’s Cathedral or the Hofburg, the Imperial palace of the Habsburg dynasty, have indeed shaped the city’s landscape extensively, and are beyond any doubt beautiful symbols of Vienna’s rich culture and history. Thus, Vienna undoubtedly is a jewel from the past but this raises the question though how the city is perceived by its youth.

While these landmarks undoubtedly represent an integral part of Viennese culture, and therefore form essential features of the city’s tourist attractions, I would argue that this side of Vienna only illustrates one aspect of the city’s versatile identity. Vienna is so much more than just a museum stuck in its former imperial past. It is a fast-growing metropolis at Europe’s centre having served as a hub between East and West for centuries now. It is furthermore, according to Mercer’s Quality of Living Survey, a constant favourite for the title of most liveable city in the world (Mercer Quality of Living Ranking 2017).

All these mentioned features are elements that contribute to the city’s high-quality standard of living and its overall beauty. However, it wasn’t mere beauty that granted Vienna a spot on UNESCO’s prestigious list of World Heritage Sites. Apart from the palace and gardens of Schönbrunn, the Emperor’s former summer residence, the historic city centre of Vienna has also been introduced on this prestigious list in 2001. It is comprised of the 1st municipal district “Innere Stadt” as well as the areas covered by Schwarzenberg Palace, Belvedere Palace and the Convent of the Salesian Sisters at Rennweg, (City of Vienna 2014, pp. 40-41).

The origins of the UNESCO World Heritage List lie in the 1972 “Convention Concerning the Protection of the World Cultural and Natural Heritage.” The main benefits of ratifying the World Heritage Convention are that of belonging to a global community not only appreciating but also committing itself to preserve examples of outstanding cultural and natural value to humanity. The inscription of a site on the World Heritage List also raises public awareness for it, in turn increasing tourist activities at the site. The most direct benefit State Parties to the Convention gain is access to the World Heritage Fund. Each year, around $4 million are made available to assist in the conservation of these various sites. However, these benefits are only bestowed upon those countries adhering to the Convention, and which have declared themselves responsible for the conservation and preservation of these sites (UNESCO World Heritage Centre).

The UNESCO named the following three reasons as justification for the inscription of Vienna’s historic city centre on this list:

Especially the two last reasons are, in my opinion, of vital importance to Vienna’s image as a vibrant and modern city in accordance with its cultural heritage. Friedrich Dahm, Provincial Curator for Vienna within the Federal Office for the Protection of Monuments, explained “The preservation and contemporary use of our cultural heritage, with due account taken of the needs of both modern municipal administration and rapid urban growth, constitutes a major twofold challenge that is met in exemplary fashion by the City of Vienna”. So, with the inscription on the list of the UNESCO World Heritage Sites, the city of Vienna has declared itself responsible to preserve this cultural heritage while integrating the historic building stock into a lively and contemporary urban organism. This delicate interplay between history and modernism on the one hand puts constraints on the construction of new building stock, especially within and around the “Core Zone” of the World Heritage Site, encompassing the before mentioned areas. This difficulty was very present at the construction of Vienna’s new central railway station. Due to the latter’s close proximity to Belvedere Palace, complex visual studies had to be conducted in advance of construction in order to ensure that the train station would not visually interfere with the surrounding view one has from the palace (Ibid. p.45). However, the fact that the city’s urban development ensures prosperous growth while maintaining its World Cultural Heritage also grants Vienna a unique hub role not only in a geographical sense between East and West but also in a temporal manner between history and modernism.

The result of this interplay is the emergence of highly modern buildings and constructs such as the Hotel Topazz and the Museums Quartier Wien (MQ) within the historic city centre. However, the image of the city is not only influenced and shaped in a modern youthful way by its architecture but also by these buildings’ use. The latter mentioned Museums Quartier Wien serves as perfect illustration for this phenomenon. Located at the very heart of Vienna, alongside the museums for historic art and natural history, in an area once occupied by the Baroque imperial stables, lies one of the world’s largest centres of art and culture. The vast diversity is not only showcased in its unique style of architecture, which features a blending of 18th and 19th century buildings with contemporary museum architecture, but also in its rich cultural program. The MQ hosts a variety of exhibitions and cultural events including dance performances, film festivals, literature readings and DJ line ups. It therefore sets a strong symbol of youth culture in the heart of Vienna (Ibid. p. 23).

The Hofburg, and city hall can also serve as examples of a blending of historical and modern youth culture elements. Throughout the year, these two historical buildings within the Core Zone fulfil their usual functions. City hall serves as the seat of Vienna’s municipal government, and the Hofburg, formerly the imperial residence for centuries, today serves as venue for congresses and conventions, and hosts not only the Austrian National Library but also the seat of the OSCE’s Secretariat. However, on a regular period, and particularly during the annual ball season their halls turn into festive ball events and locations for some of Vienna’s biggest celebrations, attracting not only esteemed guests from all around the world but also large numbers of local young people.

Another public space, which is heavily shaped by modern youth culture, and must therefore be mentioned in this list, is the area

around the Danube Canal bordering the Core Zone. Especially over the summer, this recreational space turns into a popular bar area for young Viennese. It is located in an area, which captures the interplay of history and modernism perfectly as this is where the historic city centre under UNESCO world heritage status meets the strip of the 2nd municipal district “Leopoldstadt” that has been heavily modernized in the past years. This is where state-of-the-art skyscrapers such as the Design Tower, which has become a magnet for lovers of Vienna’s contemporary architecture, can be found in close proximity to the historic city centre (Ibid. p.30).

The “Museumsquartier”, Hofburg, and the bar area around the Danube Canal only illustrate a glimpse at the vibrant nightlife the city has to offer. The reasons why I have chosen to elaborate on these examples though is due to their location within the World Heritage Core Zone or in its immediate surrounding, and its consequential connection to the past. On the one hand, these constructs, displaying former baroque glamour, make up integral components of the historic city centre’s rich cultural heritage. On the other, events and celebrations taking place here have become an indispensable part of Viennese youth culture. Those new constructs blended into Vienna’s World Cultural Heritage, shaping the cityscape increasingly, such as the earlier mentioned Hotel Topazz or the Design Tower symbolise the city’s further development as well. Not only do they set examples of low-energy housings but due to their successful blending with the historical building stock, they also set positive examples for a responsible and sustainable handling of the city’s World Cultural Heritage.

It is this interplay between history and modernism, which makes Austria’s capital so unique. It is a place where the past truly meets the present, and where symbols of a once great empire are integrated into the vibrant urban organism of a modern European metropolis. All that can be found within the boundaries of a single district.

Information on the author:

Dominik Draxler (1992) obtained his Bachelor’s Degree in Political Science from the University of Vienna in 2015. His Thesis dealt with the question if Germany could be considered a potential hegemon in Europe in light of the Eurozone crisis and the resulting austerity measures essentially influenced by German foreign policy.

Currently, Dominik is enrolled in his final year at the Diplomatic Academy of Vienna, pursuing a Master’s Degree in Advanced International Studies. His main academic interest lies, perhaps due to his own background and the experiences gained during his semester abroad in Washington D.C., in Transatlantic Relations. He himself would like to pursue an active career in this field after his studies, and contribute to strong Transatlantic ties on both sides of the Atlantic.

Within the framework of this workshop, Dominik acted as young ambassador to the Organization of World Heritage Cities, representing the city of Vienna.